It is difficult for me to not marry the sacred and the secular.  This impulse informs all of my work in studying the history of African American music.  It also, as far as I can tell, is why scripture tells us God made man in Jesus who walked this Earth.

Here are four hip hop songs loosely organized to parallel the story of Holy Week: first, the people's rejection of the Son of Man, Judas' betrayal, the faithful keeping vigil and the ultimate resurrection of Jesus Christ.

They Came From Steel and They Return To Dust...

My longtime friend and mentor PS Chase sent me this email: "I didn't realize that Bethlehem Steel was still in effect to some degree until 1995? Can you give me a few words on the feeling around town at the time? I don't know if your family or friends felt any direct effect of this... A descriptive passage about this would be nice, but I'll take what I can get - lunch time notes on a napkin, matchbook poetry, or a list of random thoughts..." The following is my response. Maybe a the beginnings of a future collaboration?
I remember playing on my elementary school playground as a kid and during the day Beth Steel  and the nearby coke plants would belch billowing mushroom clouds. I vividly recall one being so big it blocked out the sun; we were no more than 1/2 mile from the factories.
Beth Steel was alive: Day and night it groaned and screeched.  Train whistles, mechanical bangs and clangs.  When water was poured onto iron to cool, it gave out a deafening sizzle you could hear throughout town.
As a kid in the early 80s, Bethlehem Steel was a point of pride: the steel in the GW bridge, Empire State building were made here in Bethlehem.   Later learned Rockafeller Center, MSG, Hoover Dam all had elements of Beth Steel in it.
By the late 80s though, there was figurative black cloud over the whole enterprise that would not disappear: steel, cars, etc. were being made better and cheaper in Japan.  Layoffs were evidenced by the few scattered lonely cars in the huge parking lots that used to overflow for shift workers.  Two of my best friends father's were engineers for Steel, R&D, their jobs were always seemingly threatened. One of my best friend's family moved to Toronto when I was 13 because of lack of job security. A girl's was crying at school one morning- what's wrong?- her father fell into molten cup and was badly burned but still alive.

Union halls were packed with workers who wore uncertain on their faces, sounds of trouble in the voices. One very large Steelworkers hall near where I lived was the playground I learned to ride my bike at, played Miami Vice with my friends, stick ball, sledding. There a huge red painted I-beam in front of the hall with the words on it : "STOP ILLEGAL STEEL IMPORTS" which I had no idea what it meant.  I did know though after watching a Star Wars documentary that if you hit an I-beam with a wrench it made the Storm Troopers' laser gun sound, which we liked to do a lot until someone would come out and yell at us. Later I learned, the I-beam was a public protest of the Federal government's allowance of cheap steel to be sold in this country favoring multi-nats and directly effecting Union leverage.
Beth Steel played a large part in my wayward youth. Ellyn and Gabe's father was a crane operator who worked what shifts were available.  He sometimes worked double on the second and third shift from 5 pm to 7 am I think. We loved this because we could gig at his house, the home we incidentally live in now.  Once Gabe and I blasted a Kool G Rap song so loud at 2 am when his father was away police came and literally banged down the door.  If Gabe's dad was in a bad mood that week he would declare no one could sleep over and Gabe would hide me in his attic and I would pass out on a foam egg carton amongst a mad scientist's lab of broken walkmans and vcrs and LED lights. 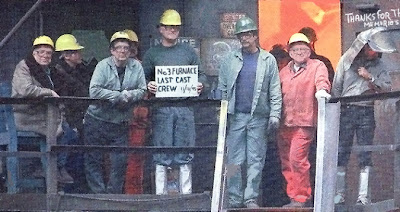 We were living in upstate New York when the last piece steel rolled off the assembly line. When we moved back in '97 it took me a week or two to figure out what had changed: Bethlehem was quiet. That ever present sound of production that followed wherever you were when downtown or on the South Side had disappeared.  I went to Lehigh football game one Saturday morning driving by once stretch of the abandoned factory that was no less than a mile long.  Driving home from the game that same day, the building had been detonated and leveled and now you could see the river.
It is somewhat amazing they are finding ways to build on these abandoned brown fields. Sands built a casino congruent with the industrial architecture and thus far had moderate success.  Some of the re-development is likely not on the up and up- tax breaks, payoffs.  But what are you going to do? From '95 to '05 the whole area was a wasteland.  Still, it employs a fraction of what Steel once did. There's SteelStacks Arts Center I will be spinning at this summer that has also been built. There is a lot money exchanging hands down on the South Side by the river where parts of the factories and offices still remain.  I teach in an old Beth Steel office building that has tremendous unexplainable presence to it.

Through my job I have had the pleasure of meeting photographer Theo Anderson who is making a name for himself with his impressive work at old Bethlehem Steel, chronicling ghosts of future past.  His photographs say far more than words in depicting how industry lives and dies.  A fairly appropriate chant down Babylon dub accompanies the below video.

This is edutainment at its finest: Startling evidence that unwanted children and crime are inextricably linked; deft creative presentation by Eugene Jarecki coupled with Steven Levitt's daring hypothesis. This is not so much about abortion but the world children are born into.
Bonus theme music: Jimi asks us to make up our minds: