Not only was a first of its kind, Brian Cross’ ethnography of the West Coast Hip Hop scene “It's Not About a Salary...” also provides insight into why Hip Hop originating from across the country differs in content and style in many ways.  Further, when we use Simon Frith's methodology of identifying technique and technology to identify genres of popular music, we discover why West Coast Hip Hop may sound different than East Coast but ultimately its music structure is similar.


To begin, Cross analyzes Run DMC’s “Peter Piper” and the World Class Wrecking Cru’s “The Cabbage Patch,” using the differences between the two records to illustrate variations between the East Coast and West Coast approach to hip hop.


Cross purposely contrasted two songs from the same era that employing the same sample source, Bob James' "Take Me the Madri Gras." What is difference? Cross likens “The Cabbage Patch” to a “big-band sound” as compared to “Peter Piper's" “stripped down funk.” Cross generalizes that from 1982 to 1987, most West Coast Hip Hop releases tended to lack originality or complexity in rhythm or lyrics.  The music was largely derivative and did not gain as much critical or commercial recognition.


There is informal evidence that DJing, rapping, breakdancing and graffiti had its West Coast counterparts as early as the late 1970s.  But considering that recorded Hip Hop music did not originate out West, Cross' opinion is not surprising.  West Coast techniques were being shaped by what technologies are immediately available or in this case, unavailable.  The regional beginnings of this culture relied on imported Hip Hop from New York City in the early 1980s, primarily rap music biggest hits.

Cross indicates that the stylistically varied East Coast Hip Hop of the early 1980s was difficult to locate in CA.  Another speculation cites that records like electro-funk sound of “Planet Rock” were more enthusiastically embraced than the “underground” East Coast sound.  Thus, Cross states “more commercial aspects of the music seemed dominant in LA.”  While the community reflected the some of the same forms of structural marginalization of education and job opportunity- Cross contends the “cutting edge of the music seemed to have been lost, in crossing the country, to commercialism.”  Bobby Jimmy and the Critters made a name for themselves with their parody raps.


We also learn that much like Bronx Hip Hop in the 1970s, the West Coast scene began with a nomadic sound system, Uncle Jamm’s Army.  Local DJs and MCs also made mix tapes and pressed their own records in the first half of the 80s, soon aided by radio and a dedicated club scene.

While this is not an absolute, one can also generalize that West Coast DJs favored the spacey George Clinton P-Funk sound, while East Coast DJs preferred the sparse, tough funk of the JBs.  Roughly from 1987 to the "Industrial Era of Hip Hop" in 1997, this difference in inspiration and source material would characterize the musical difference between the two coasts.


However, both the sharp contrast in urban culture and leisure practices of LA to NYC proved to be the West Coast’s literal selling point.  In New York, since warm weather was seasonal, dark stuffy hip hop clubs were the norm. Crowded buildings and streets, cluttered skylines, and an aggressive but distant attitude characterized New York. Whereas Los Angeles was favored by the sun year around, by sprawling suburbs and a laid back demeanor. While LA is as distinct and awesome as NYC, the rest of America, especially the nameless suburbs, have more in common with this characterization of LA than they do with the nature of New York.

Perhaps the pace of the West Coast may be more appealing to a broader mainstream American sensibility.  But perhaps far more influential on the content of West Coast rap music was the proliferation of crack cocaine, automatic weapons and gang warfare that became to characterize California's most troubled communities such as Compton, Watts and Oakland.

Ice T immediate makes clear how addictive and dangerous his brand of rap is:

For those within the culture who understood Hip Hop’s theatrical raps of exaggerated claims of supremacy and cruel disses, “gangsta rap” as the critics called it, simply signaled a new era of Hip Hop MCs.  Through the success of Ice T, NWA, and Too Short most notably, by the end of the 80s the metaphoric base of MCs boasts now included graphic depictions of sex, abuse of women, detailed accounts of black on black violence, rebelling against police, and selling crack cocaine.  While a group like NWA was suddenly heralded as street reporters, the careless violence of their lyrics was intended as a selling point like a Hollywood action film rather than a carefully considered protest of injustice.


NWA's "Fuck the Police" earned the group a warning from the FBI.  The record begins with Ice Cube's premeditated outrage, followed by Ren's aggressive defiance and finished by Eazy E's self aggrandizing swagger.


While not as notorious, "Express Yourself" NWA's sensationally equates self expression will result in incarceration, peril and death:

The East Coast / West Coast “War” was a legitimate rivalry on record having its beginnings in the early 1990s with Tim Dog barking, “Fuck Compton." The West Coast's growing profile did not sit well with tough South Bronx purists:

As Hip Hop culture emerged in new forms via new mediums, respect and exposure in television, films and in print began newly contested grounds to obtain respect.  The Source Magazine, the self proclaimed "Hip Hop Bible" became a hot bed of controversy, debate and acrimony erupted over coverage and album reviews in particular.  While the West Coast was gaining greater record sales, East Coast Hip Hop tended to garner more attention of music critics.  Increased competition between East and West Coast crews seemingly at first only forced MCs and DJs to up the creative ante; the reverence paid to Dre’s 1992 Chronic or Wu Tang’s 1993 36 Chambers confirms this idea.

But by the mid 90s, with the lines between drug dealing and music making blurred, the competitiveness of hip hop culture turned fatal with the September 1996 shooting of Tupac Shakur in Las Vegas and March 1997 shooting of Christopher Wallace in Los Angeles.

The "beef" began after Tupac Shakur’s initial 1995 shooting in New York seemed to implicate the Bad Boy camp or at least somebody from an East Coast crew.  Rivalries on record between Bad Boy and Death Row turned from competitive to threatening as in Tupac’s “Hit ‘em Up” or Biggie’s “Who Shot Ya?”


Did the music itself create conditions that lead to the killing of Big and 'Pac? Antagonistic rivalries have always been a component of Hip Hop traditions.  A “dis” record or “beef” between MCs is nothing new.  See the Juice Crew’s “The Bridge” vs. Boogie Down Productions’ “South Bronx.” Even George Clinton told James Brown, “Let’s take it to the stage, sucka,” rivaling each other as to who owned the title of “Godfather of funk.”

What was new to this still relatively young Hip Hop record business were the criminal backgrounds of its producers and promoters.  Suge Knight’s openly stated connection to the Mob Piru Blood Gang and Sean Combs' history overseeing a fatal concert event created an atmosphere in which controversy was a business practice and tragedy was quick to be capitalized upon.

Here the tensions erupt at award shows, interviews and the press, resulting in hurt feelings, gun fire and ultimately death:


Newspapers and television journalists immediately declared a “Rap War” between West and East Coast hip hop crews; ignoring any of the traditions of rivalry within Hip Hop music, news reports instead emphasized the troubled pasts of Tupac and Biggie as if their deaths were inevitable.  Any larger social context in which the more violent nature of rap music portrayed was being ignored in favor of highlighting the tragic story of its fallen stars.  Yet, to this day neither murders have been solved and the direct or indirect involvement of the LAPD and LVPD remains a distinct possibility. 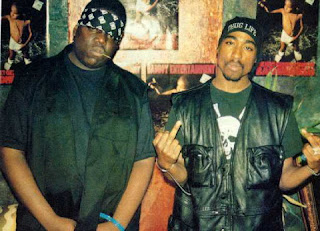 It should be noted that Minister Louis Farrakhan and the Nation of Islam were instrumental in conducting a “peace summit” in Chicago between high profile East and West Coast rap artists. “Beefs” between the Coasts or artists have been generally confined to the recording booth since the loss of two of hip hop most charismatic, talented, and troubled MCs.
A post by ARM 18 at 6/21/2011