Who Stole The Soul? Maybe Nobody

I’ve gotten to know Godilla over the last several years as a hungry, earnest MC who’s insight into Hip Hop culture is as sharp as his battle rhymes. His Jaguar Paw LP was a precise and efficient display of East Coast lyricism and rugged boom bap. Guest spots from eastern PA bosses King Magnetic and Adlib were woven seamlessly into appearances by underground luminaries such as Ed OG, UG of Cella Dwellas, Mr Voodoo and Gab Gacha. “Paxill” is an emotive track in the vein of ‘90s classics like “Tearz” or “Suicidal Thoughts.”
Now for today's presentation...
“nothin wrong w/tryin new directions musically but damn the east coast lost its identity...when was the exact time?” - Godilla Jaguar Paw, 9/8/11


Mostly I keep up with ‘Illa online as he posts his music, classic and contemporary rap bangers and his musings like above found on FB. In response to the question he posted, there were a lot of pop shots at Puff and jiggy rap; myself and others took swipes when NYC rappers and DJs began breaking bread with Dirty South rappers. But I have to be honest, it’s paradoxical to live and die for Hip Hop- a culture and music that has always broken “the rules”- and in the same breath dis another part of the country for its own take on the music.


Which got me thinking of the following Jay Electronica verse from “I Feel Good”:


They said Down South was wack when it came to rap
That our thoughts was too slow and we couldn’t adapt
When in fact we taught y’all how to build a label from scratch
While you was whining ‘bout the points in your contract, black
We slip when we talk, and we dip when we walk
When we came to the game, niggas stole our slang
Uh huh, we hit the game with a brand new funk
And plus we taught ya how to sling a record out of your trunk


New Orleans’s native Jay Elect has spent his time in New York, Philly and Detroit to know of what he speaks; the “they” in his verse is no doubt the “East Coast” or “New York.” To respond to Godilla’s request to identify what point did the game change for East Coast Hip Hop, it may not be answering when but how.
If You're Really Dope, Why Ain't Ya Signed Yet?”
Here's the deal, the “pioneers” and “G.O.A.T’s” of Hip Hop from New York City that succeeded financially and artistically beyond the five boroughs in the 1980s and 90s were more often than not, beholden to major record label deals. The “Golden Era” greats, Public Enemy, De La Soul, KRS ONE, Big Daddy Kane, LL Cool J, A Tribe Called Quest, Nas, Biggie and others were all trailblazing artists, yes. But were their careers independently managed and distributed? No. (Run DMC on Profile Records was the exception to this trend).
While there were independent boutique labels that undoubtedly recorded classic material in the 1980s and early 90s, rarely did they find any sort of national or long term success:

What’s more, the most widely recognized rap labels of that era, the “independent” subsidiary labels all were overseen by larger corporations:


It makes you ask, when you think East Coast Hip Hop, who's runnin' this rap shit?
The Exception to Rule #4080
Hip Hop from NYC has always had a dubious relationships with records labels and the odyssey of being signed, having your music recorded and distributed nationally; see namely “Rapper's Delight” and Sugar Hill and Enjoy Records.
It should be noted, that the Golden Era of East Coast Hip Hop music did succeed artistically and financially. Primarily this can be attributed to a “hand's off” approach to Hip Hop music parent record labels adopted from a period roughly between 1986 to 1994. Major label executives trusted artists more implicitly and they let those who knew the culture guide its prolific growth. For instance, DJs like the Awesome 2 and Red Alert supported Ed OG and Tribe Called Quest respectively. Instinctive A&Rs like Dante Ross from Electra helped bring to the world artists such as Busta Rhymes, MF Doom (Zev Luv X of KMD), Pete Rock, Sadat X, to name a few. Working at Sony, MC Serch was certain a kid named Nasty Nas from the Bridge was the Second Coming.
Ultimately, truth be told, most of what is considered the most successful New York Hip Hop has never been an independent venture.  Furthermore, the biggest multi-platinum labels that defined 1990s Hip Hop that appeared “Black Owned and Operated” were under the ownership of the “Big Four” music companies: Bad Boy by Warner, Def Jam and Death Row by Universal.
(Wu Tang gets props for presenting each MC of the Clan as a “free agent.” It was a lucrative tactic for the individual performers but it increased the difficulty of sustaining the group, the very reason listeners were drawn to their music. Independent Rawkus Records also made an indelible mark in the late '90s but lost its potency when- surprise- it signed a deal with MCA in 2002.)
"And Then You Say, Goddamn, They Ruthless!"
But if you look at the artists to emerge from other parts of the country in the 1980s and 90s and virtually all of them independently launched their own careers: Too Short's tapes on his 75 Girls label; Ice T “6 N Mornin” on Techno Hop; Eazy-E's “Boyz In Da Hood” on Ruthless; 2 Live Crew on Luke Skyywalker Records; Ghetto Boys on Rap-A-Lot Records; Schooly D Records' “P.S.K.” These artists and their managers worked independent distribution networks throughout the country, getting their records into mom and pop shops and DJ record pools. These artists made a name for themselves by locking up a regional following that served as built in grass roots support when they went national, lending authenticity and excitement to their music. If that ain't Hip Hop, then I don't know what is...

No Limit, Cash Money and others began making noise in the late 90s following a similar independently produced formula. If you think about it, the Dirty South wasn't knocking on the door to try to get in, they were giving NYC a chance to get on board! 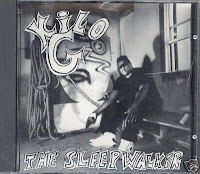 Southern rap (and the Bay Area should be mentioned too) also was aided by changing technology in media by the turn of the century. The ability to make a fairly professional recording, burn your own CDs or even start sharing them online became widely available to the aspiring local artist by the late '90s. These new avenues of distribution gave Southern artists market leverage, creative autonomy and, simply, swag.
So my answer to Godilla's question when you break it down is that East Coast Hip Hop may not only have lost its identity, it may have never owned it to begin with. “Tommy Boy wants another 'Say No'- huh”
A post by ARM 18 at 9/09/2011