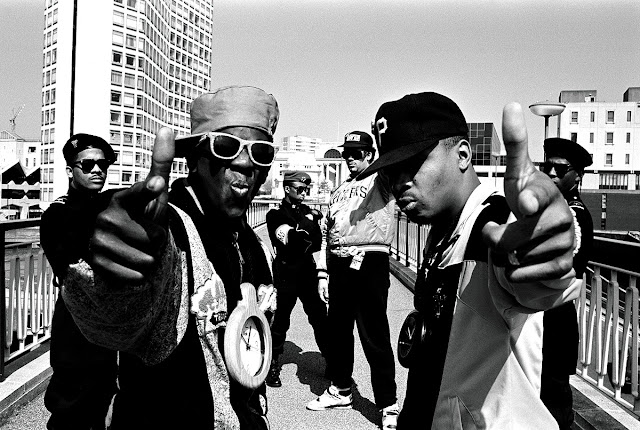 The character and music of PE were intended to challenge the status quo of the white ruling class.  For PE, Hip Hop was a soundtrack for a social rebellion: defiant raps were meant to spark action while a scathing musical backdrop rejected all conventional notions of “music.”

All aspects of PE- production techniques, songwriting methods, even nicknames- were calculated concepts to convey Public Enemy’s call for a social and musical revolution.  These elaborate conceits proved Hip Hop music embodied more than just boasts and festive rhymes.  PE established that rapping and making beats was a culture that would allow voices previously unheard to contribute to the betterment of society.  This idea is no different than what Bam and the Zulus instituted ten years prior.  Rather than in Bronx high schools, Public Enemy’s stage was worldwide and aided by widespread media coverage.

PE lent legitimacy to all Hip Hop DJs, MCs, rappers and producers who followed for not necessarily the same radical reasons.  Through PE and other groups of this era, Hip Hop was understood as a cultural force to be reckoned with as the culture began to redefine social norms, political viewpoints, and the commercial possibilities of Hip Hop.  From the late 1980s on, whether a rapper posed “gangsta,” “thug,” or “playa,” his or her brand of Hip Hop music became synonymous with inner city youth, specifically young black men.

·      Chuck D coined the widely used 1980s/90s sound bite stating that “Hip Hop is Black CNN”; meaning, Hip Hop covered the ignored plight of urban blacks and minorities in Reagan’s America.
·      William Jelani Cobb's To the Break of Dawn: “Their singular genius lay in the fact that [Public Enemy] recognized rap music as a form of media at a time when the most astute practitioners of the genre were just getting hip to the idea of music as a business”

c.     Speaking as the average “Blackman,” the oppression and racism indicted in Chuck’s songs did not have to be necessarily experienced by himself.
·      William Jelani Cobb: “The lyrics themselves were politically charged double entendres- as if an MC had returned to the tradition of the Negro spirituals that slaves encoded their messages of subversion”
-  pg 61, To the Break of Dawn

·      Simon Frith theorized that popular music discourse serves as a representation of COMMUNITY.  Chuck D purposely attempts to be a spokesperson for young Black America.  In "Black Steel in the Hour of Chaos" Chuck D takes the perspective of an incarcerated objector to enlistment.  The video and his lyrics relay the brutal experience of prison and a proposed escape:

a.     As “hype man” or "Joker" for PE, Flavor balanced seriousness of the group with comic, outrageous behavior.
·      With dark sunglasses, extravagant outfits, and symbolic “clocks,” Flavor’s mystical joker personality was highly entertaining.
b.     As goofy as he behaved, in song, video, and concert, Flavor’s rhymes always complimented Chuck D’s vision
·        Indirectly, Flav represented untapped potential within black youth, the ability to transition from the ‘hood to Hollywood, from lawlessness to knowledge of self.  He was Public Enemy’s “Id” to Chuck D’s “Ego”
·        Simon Frith's ideas are useful here as well.  As Flavor represents a means to help listeners manage their PUBLIC and PRIVATE lives.

In "911 is Joke" Flavor condemns law enforcement humorously, walking that fine line of outrage and disbelief.  The private injustices and tragedies black Americans experience within the criminal justice system historically have not been punished publicly:


3.    DJ Terminator X and The Bomb Squad, the production team

a.     Music as uncompromising and extreme as the subject of Chuck D’s lyrics

b.     Consciously sought to deconstruct “white” definitions of music by creating sonic collages of rhythmic noise

Hip Hop was not deemed music by the trained ear, then the Bomb Squad found this criticism perversely inspirational. As Eric Sadler admitted, with PE’s music, the group wanted to “destroy shit, we want to fuck music up”

c.     DJ scratches often used musically in intros, breaks, or bridges
d.     Bomb Squad sampled black musicians and black leaders of the 1960 / 70s to connect Hip Hop with “Pro Black” ideological movements of the past.
In "Can't Truss It" the voices of Richard Pryor, Malcolm X are brought into the same context as Chuck and Flavor's lyrics. With an equal sense of history, the visual images parallel a slavery plantation and the industrial factory, the strange fruit of lynching with Rodney King's public beating at the hands of the LAPD:

4.    The Security of the First World / The S1Ws
a.     Wearing Army fatigues, yielding Uzis, marching to the beat, the “S1Ws” reinforced PE’s militancy with physical presence.
b.     Professor Griff, “The Minister of Information,” leader the S1Ws, was the organizational influence behind “Unity Force.”
·      “UNITY FORCE” was a Martial Arts and Black Islamic organization formed in Long Island during the early 1980s which had worked with the Spectrum City sound system.
·      With over 50 members at one point, the group’s purpose was to teach a disciplined physical and mental self awareness program for young black men.
·      The Public Enemy’s initial goal was to use Hip Hop music as a vehicle for the “S1Ws” agenda.
c.     Griff and the S1Ws functioned as the “road crew,” managing stage and security for Spectrum City and early Public Enemy events. 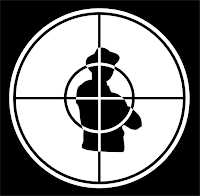 a.     The logo, designed by Chuck D, envisioning an S1W caught in the cross hairs of a rifle, captured the belief that black political leaders and activists have been targeted and killed by the US government throughout the 20th century.
b.     Further, PE and the logo represent a prevalent theme in Hip Hop that began in “The Message,” promoted by PE, and carried on in raps by Tupac, Kendrick Lamar and scores of others: young Black men of America are under attack by police, urban decay, poor educational institutions, and limited economic opportunity.


II. “Def Jam Tells You Who I Am”: Marketing Revolution

1. The Revolution will be televised

a.   While other Def Jam acts sold more (Beastie Boys, Run DMC, and LL Cool J), between 1988 and 1991 however, Public Enemy’s music, videos, lectures, and concerts attracted controversy not only in the music press but in the political arena as well.

2.     PE’s aspirations had to content to the paradox of mass market revolution

a.     PE suggests there is rampant injustice in America; Def Jam markets a PE record as the SOLUTION.
b.     Frith described Springsteen’s music containing a “whiff of nostalgia and air of fatalism.”  Is Public Enemy’s music the sound of the revolution or an uprising’s last stand?

3.     Record labels and entertainment companies attempted to market to this “unrest” in the 1990s similar to other counter cultural movements of the past
a.  Scores of “Black nationalistic” rap groups (Poor Righteous Teachers, X Clan, Queen Latifa, Brand Nubian, Boogie Down Productions) were promoted during this period
b.   Similar to marketing to teenage angst in the 1950s such as James Dean “Rebel without a Cause” or the Hippies of the 1960s, countercultural movements can be appropriated by Madison Ave and Hollywood to sell entertainment ventures and other ancillary products
c.     When the currency of such artistry dissipates, a new marketing scheme is hatched.  Dr. Dre’s 1993 “gangsta rap” success The Chronic ensured a new wave of artists with a far more nihilistic world view would dominate Hip Hop discourse in the coming years.
4.      Record companies have more in common with Adam Smith than Marcus Garvey. The                          “BOTTOM LINE” determines the success of a recording artist for a
label, not cultural impact. Social and political aspirations are secondary, if not                                        an afterthought.
A post by ARM 18 at 7/22/2015