From approximately 1985 to 1994 “The Golden Era” has been called as such by Hip Hop scholars, journalists, rappers, producers and entrepreneurs. From hardcore hip hop to bubblegum hip pop for over 20 years, the Golden Era has been put on a pedestal; sounds and images from this time period are a bar to be measured against or symbols employed to confirm authenticity.  In 1994, Chicago's Common (Sense) did not begin this trend but famously enshrined it in gender, equating "Hip-Hop in its Essence and Realness" with a girlfriend that he fell in love with only to have his heart broken.


Here's but a few selections of the music and videos that reminisced over HER:

“Me and my homies breakin nights, tryin to keep it true
Out on the roof sippin’ 90 proof, ain't nuttin’ like the old school”
Tupac, “Old School” (1995)

“Do the fans want the feeling of A Tribe Called Quest
But all they got left is this guy called West”
Kanye West, “Last Call” (2004)

“If I was an old-school fifty pound boom-box
Would you hold me on your shoulder whereveryou walk?”
Gym Class Heroes, “Stereo Hearts” (2012)

“Rooftop like we bringin' '88 back” – Iggy Azalea, “Fancy” (2014)
n marketing, music and even comedy.  Watch as symbols of the Golden Era are used to promote Brad Pitt's latest movie by breakdancing with Jimmy Fallon or the Black Eyed Peas attempt at a comeback in 2015 or an NWA or Roxanne Shante biopics: 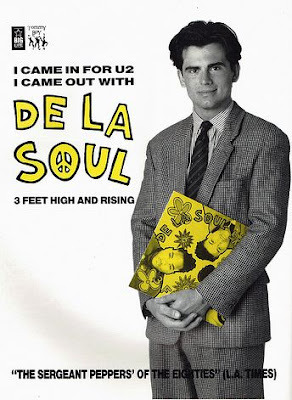 To the Break of Dawn, artists were working from a tabula rasa or a "BLANK SLATE".  With maybe only a few dozen or so notable recordings by the mid 1980s, Hip Hop recording artists had creative freedom to imagine rap music in new and varied ways.  Jelani Cobb illustrates how this process emphasised originality, resulting in a “push to expand beyond the horizons of what was and could be Hip Hop resulted in a manifold of new creations.”

And so, when a rap recording artist of this era succeeded amongst peers, critics and in sales, authenticity was confirmed.  “[Golden Era artists] had to first create their art form itself before getting down to the business of creating actual art.”  With no precedence, hip hop artists of this era not only made their first records but each release created whole new sub-genres with their efforts: pop rap, Black nationalist rap, gangsta rap, Afrocentric rap and so on. Unlike many contrived corporate rock n' roll and pop stars of the 1980s and 90s, rap music was considered "real".

Second, there is the visceral thrill and the celebrated purity that the Golden Era was a youth movement.  Many of the artists were under 21 YEARS OLD, not even adults.  Many performers' approach to their careers were a special combination of being carefree with confidence, imaginative yet determined.  Jelani Cobb emphasizes this unique phenomenon: “Artists spend years trying to cultivate a unique approach to their chosen form; in these golden years, a critical mass of mic prodigies were creating themselves and their art form at the same time.”

Sociomuscologist Simon Frith has theorized music shapes our popular MEMORY and organizes our sense of TIME and HISTORY.  Rock n' Roll criticism and fandom has has a similar romantic nostalgia for the 1950s and 1960s.  Considering these creative dynamics at play during the production and consumption of rap during this time period, it is understandable that Hip Hop's Golden Era becomes a measuring stick for the artists that follow, a reference point for innovation and aspiration.
How to Succeed in the Record Business Without Really Trying

In Blues People, Leroi Jones made clear creativity does not occur in a vacuum.  However, ironically, another factor to be considered in the Golden Era's productivity was the lack of stifling corporate control. Record labels were “laissez-faire” (“LEAVE ALONE”) in their approach to Hip Hop acts on their roster. On one hand, this meant little monies were spent finding, developing and promoting rap acts. But on the other hand, as record labels signed Hip Hop artists without much scrutiny, this allowed for Hip Hop practitioners to police themselves, especially in New York City.

Most large record labels were ill equipped to cultivate Hip Hop talent.  The wise choice was to turn to those gatekeepers who were in the know: established Hip Hop DJs, journalists, promoters or nightclub owners.  Informally, these types acted as A&R (“Artist and Repertoire”) for the label, scouting talent and guiding the creative process.  Along with promotional push of grassroots "street teams," tried and tested Hip Hop performers landed record deals with an international reach from this synergy.

In New York City in particular, talent was vetted on the live stage and “paying dues” in front of live audiences could make or break an artist. Criteria of the time dictated an MC had to be able to “rock the house” before they were prepared to step into a recording booth. Here's an example of a young Fresh Prince and his DJ Jazzy Jeff earning their way to acclaim first on stage in New York before MTV.


Interestingly, the competitive nature of live Hip Hop music found in MC or DJ or sound system “battles” manifested in the form of a “DIS” records or “ANSWER” records.  UTFO's "Roxanne, Roxanne" created a wave of responses in 1984, certifying controversy to be a lucrative marketing technique to promote or break an artist.

As lead by KRS ONE and MC Shan, one of the more significant rivalries of this era was between the Bronx's Boogie Down Productions and Queen's Juice Crew.  You love to hear the story again and again:


Note KRS ONE's comments on his sudden arrival and new found responsibility: “I found myself representing the Bronx… I didn't realize what a record did for pride… the Bronx was alive again.” Keep this in mind when considering Public Enemy's career and how Hip Hop artists of the Golden Era became quasi-political figures.  Willingly or not, the lyrics and ideologies of many artists of this era became thought of as representations of Black urban youth.


The record industry also benefited unwittingly by the bare-bones, do it yourself aesthetic of Hip Hop music production.  Prior to sampling becoming cost prohibitive in the late 1990s, rap records were produced inexpensively with innovative recording techniques.  Bambaataa's “PLANET ROCK” provided a blueprint: popular breakbeats and DJ routines could be reconstructed and reimagined into a new song form.  William Jelani Cobb explains further: “At best, [Hip Hop artists] take pre-existing scraps of sound and color and compose them into entirely new piece of art.  At its worst, the new production amounted to musical plagiarism.”

Before sampling litigation marginalized the technique, a clear gesture was being made attempting to highlight records of old as useful in a new context.  Stetsasonic explain in “Talkin’ All That Jazz”:

“Tell the truth, James Brown was old / 'Til Eric and Rakim came out with ‘I Got Soul’
Rap brings back old R&B / And if we would not, people could've forgot”

Jelani Cobb continues: “[Sampling] technology transformed used record bins into aural scrap yards, and that long-neglected album collection gathering dust in the attic into a vinyl encyclopedia of sounds.” While borrowing, covering and outright stealing of songs, vamps, chords and lyrics can be found in any American popular music form, never had an entire genre dedicated itself to carrying the torch of artists, music and movements that had long disappeared in the public imagination. Plagiarism aside, one can argue by championing a sampling approach to music making, Golden Era rap artists assisted in introducing blues, jazz, soul and rock n' roll to a new, younger audience.


For the record labels, this meant low investment, high yield. Rather than using LIVE musicians, technicians, song writers and established producers, Hip Hop records from the Golden Era were often conceived by DJ and MC’s spontaneous creativity. With the aid of a single engineer, a turntable, sampler and a drum machine, Hip Hop artists created records within weeks, reducing the costs of studio time and paid professionals. Jelani Cobb explains this unique occurrence: “The emerging sound of Hip Hop managed to be both elemental and technological simultaneously.”

The term Golden Era certainly sounds like a subjective measurement but a variety of factors have at the very least revealed this era in Hip Hop music as being unique in how it was produced, overseen and consumed.  Evidenced in the lyrics of Wu Tang, Nas and Biggie, offspring of the Golden Era, every good thing comes to a close.  Even KRS ONE lamented in 1993: “But all along, I'm still lookin' around / And all I can see are these rap groups fallin' down.”

By the mid 90s, the record industry became more savvy, milking the above formula for all it was worth, prompting veterans of the culture to wonder what happens when you're outta here.  More significantly, the next generation of MCs in the 1990s were the children of crack cocaine, survivors of the surrounding violence of the epidemic and resulting mass incarceration.  The sound and intent of rap music would be forever altered leaving the Golden Era to be a distant memory.
A post by ARM 18 at 7/21/2015