The New School:
The Boogie Down comes downtown, Bam takes Hip Hop worldwide
MCs to rap a "Message" with a social purpose
and Run DMC crown themselves Kings

For the purposes of this discussion, we will consider the "Old School" the period of Hip Hop at its inception from 1973 to 1981.  When thinking of this time frame, the Old School marks where Hip Hop birth at Kool Herc's first parties in '73 at the Sedgwick Housing Projects in the Bronx to the emergence of Bambaataa's Zulu Nation, Grandmaster Flash's DJ mastery and MC crews in the late 1970s.  It would also include the first recorded efforts of Hip Hop whether it be the dubious smash hit "Rapper's Delight" or the early recordings on Enjoy Records.  Kurtis Blow emerged from this era as the first Hip Hop recording star that straddled both legitimacy and commercial success.

Not only does the following two part ABC news report overview the roots of rap and this early period effectively, it is the first televised news coverage of the emerging Hip Hop scene from uptown:

Ironically as national news and audiences began to learn about Hip Hop, there was questions about the sustainability of the culture outside of New York or even within it. By 1982, parties in the Bronx start losing popularity.
There is speculation that the original hip hop audience started to “grow up”; Hip Hop’s first generation began to seek jobs, settle down. Others who continued to contribute to the culture sought for more; parties in your old high school gymnasium or local community center were losing favor. Founding Hip Hop DJ Kool Herc had all but disappeared by the early 1980s after being stabbed at one of his own parties. As this video clip explains, the potential for violence was ever present at "Old School" Hip Hop events.
As for recording industry, record labels generally treated rap records as novelties without artistic potential, a fad presumed that would soon meet its demise as popular disco had by 1980.  “Between the 1979 release of ‘Rapper’s Delight’ and 1983, the music was perceived as a cute Negro niche market” according to William Jelani Cobb inTo the Break of Dawn.

Like a lifeline, occurring essentially at the same time these challenges persisted in 1982, the Punk and “New Wave” music scene of downtown Manhattan and the Bronx Hip Hop movement began to intermingle.  New avenues of artistic and economic growth for Hip Hop music and culture appeared in the form of breakthrough recordings, videos and feature length movies.

“New Wave”, like the punk music which it sprung forth from, sought a new approach to creating pop music. Punk championed a “Do It Yourself” attitude that shunned music training for sheer energy and aggression. Punk and New Wave bands from Europe and NYC also moved away from the rock ‘n roll’s predictable "guitar gods" and drum solos.
Choosing to use synthesizers and drum machines, New Wave songs were often danceable with moody, obscure lyrics- a darker, futuristic disco sound. New Wave songwriters also drew musical inspiration from Reggae, Disco, and R&B, mixing elements of those genres into their music. Talking Heads, New Order, Duran Duran, Depeche Mode and The Police are the perhaps the most recognized bands of this genre.
There was an undeniable synergy when these crowds met despite the culture clash. Punk's outlaw and confrontational passion as well as New Wave music’s appreciation and “borrowing” from other music genres was in line with the spirit of the Hip Hop movement:

As New Wave artists began to "check out" Hip Hop performances, Hip Hop benefited by gaining a new audience that produced broader artistic possibilities and potential for securing more lucrative performance venues or recording ventures.
For example, after the success of "Rapper's Delight" and the growing recognition of graffiti as a rebel art form, the well known New Wave group Blondie gave Hip Hop performers recognition and a platform that to this point in Hip Hop history had not been realized yet. See video for more details:

Notable moments of 1982 that shape the development of Hip Hop culture as it emerged from the Bronx to international recognition:


5.  A broad spectrum of races and nationalities mix at these clubs. At some of the larger clubs, crowds of 3,000 to 4,000 people in attendance from all over the northeast, exposing hip hop music to thousands of new listeners.
6.  New Wave songs begin to be “versioned” by hip hop acts. For example, in 1982, Tom Tom Club, an offshoot of the Talking Heads, records “Genius of Love” an ode to funk and soul music. Using the beat and / or lyrics, hip hop versions of “Genius of Love” are soon recorded or performed at hip hop shows.

The success of this record simultaneously revolutionized pop and hip hop music.

1.  “Planet Rock” sampled or replayed the records Bam used in his DJ routines. Bam proved that the innovations of the hip hop DJ could create new music.

2.  Similar to the New Wave attitude, new forms of music would be found using the newest technologies. Bam and his producers willingly used voice changers, drum machines, samplers, and keyboards.

Prior to “Planet Rock”, electronic instruments as the principal tool for production of music occurred only on the fringes of popular music in the works of Kraftwerk or jazz. Most conspicuously, albums such as Michael Jackson’s Thriller and Madonna’s debut were propelled by drum machines and keyboards. 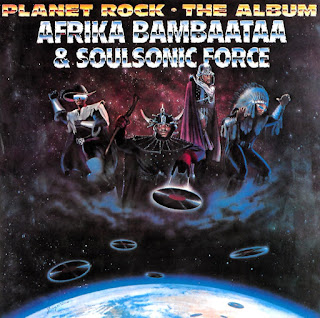 1.  “Planet Rock” was meant as an anthem for the Zulu Nation’s philosophy: peace, unity, love and having fun.

2.  By simply listening to “Planet Rock” you were participating in an cultural event not just a recording.

3.  If you take Bambaataa’s record selections and the “Party People” and transport them to “Planet Rock” something special happens: here breakbeats were looped effortlessly, vocals were entertaining food for thought, and pleasure was a never ending sensation.

4.  Bambaataa was assisted by white musicians from New Wave scene, Arthur Baker and John Robbie, confirming that hip hop music could be a means to breaking down social and racial barriers.


As described by Downtown club owner Kool Lady Blue: "It was the Reagan era and Nicaragua and talk of war and nuclear weapons. But then there was this whole thing going on in New York where it was the youth culture getting together in unity and peace and having fun. No segregation and everyone joining together. Just the opposite of what was going on politically in America."
"Planet Rock" was a sonic boom, sending Hip Hop sounds and sensibilities well beyond the boundaries of the Bronx. But while there may have been less jams in the park, probably no location embodied the growing possibilities of Hip Hop's New School than the Fever:
The Message

1.  The music and the lyrics of “The Message” purposefully compliment each other. The spooky key boards and dark basslines looped w/o bridge or downbeat create a disturbing atmosphere that serves as a metaphor for the lyrics. This songwriting technique gave depth to the MC Melle Mel and Duke Bootee's verses, awarding “rap” critical praise it had never earned prior. 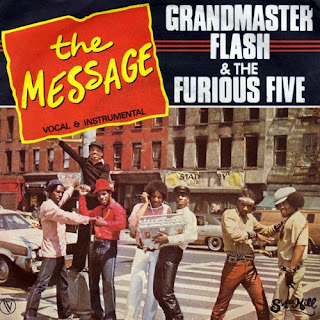 3.  Of note, this record did not feature Grandmaster Flash on turntables and did not even feature the original members of the Furious Five.  It was the last recording Melle Mel, Flash and the Furious Five would record together.  In retrospect, this effort was proof that a compelling lyricist matched with just a drum machine and a keyboard could spawn a hit record and a new direction for Hip Hop. So how did a group from Hollis, Queens become self professed "ambassadors" for Hip Hop music? How were they able to become recognizable international icons of Hip Hop? Lyrically speaking, Run and DMC took a bold new approach to rhyming that was a distinctive depature from the "Old School."
Secondly, though this is an oversimplification, Run DMC took the musical direction of "Planet Rock" and married it with the hard hitting but catchy unwavering realism of "The Message."  Run DMC not only preserved and perfected Hip Hop blueprint from the Bronx but they gave it to the world to consume as the group's success forever married rap music as a commercial endeavor.
As seen in this video, Run, DMC and Jam Master Jay became international ambassadors for Hip Hop by marrying the culture with the predominate form pop at the time- rock music- and by unabashedly celebrating the emerging cultural elements of Hip Hop: DJing, MCing, breaking, graf, fashion, attitude and slang.
Qualities and attributes of Run DMC:

1.  Rapped with commanding, bellowing voices songs were confrontational in both style and content.  In contrast to many old school MCs’ smooth, female seeking personas, Run DMC were devastating rather than debonair.

3.  Dressed like kids in the parks, unlike the elaborate costumes of old school MC and DJ crews. Run, D, and Jay sported Adidas track suits and sneakers or Kangol hats with black jeans and leather jackets.

Bambaataa and Flash’s groups emulated George Clinton and Parliment’s extravagant costumes, clothing themselves in leathers and feathers or sequins and silk suits. To a certain degree, this was recommended by the record labels as they were more comfortable marketing a funk/disco group than they were a hip hop crew.

4.  The group first single, “It’s Like That / Sucker MCs” displayed both a talent for “message raps” and “battling.”

“Sucker MCs” chronicled the life of a b-boy’s rise to hip hop fame. It was hip hop’s first “rags to riches” story where hip hop music was understood as a means for fame and fortune.

7.  Ambitions were less simply winning rhyme battles at shows than a explicit goal to entertain the masses whether on record or stage.

8.  Run DMC brought the DJ back to the center stage. Jam Master Jay had singles dedicated to him, full album cuts and was highlighted at live shows.

9.  By adopting rock guitars for hip hop use and declaring themselves, “The Kings of Rock,” Run DMC were declaring that hip hop was the new form of popular music.
A post by ARM 18 at 7/12/2022