Recently my man King George and I have been discussing one of our favorite topics,  Brooklyn's Da Beatminerz.  Sports is a close second for me, but strangely, George only responds, "Yeah, that was a good ass game" anytime I mention to him last night's score. 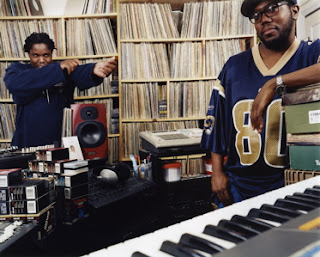 Da Beatminerz are a DJ production crew comprised of two Bushwick brothers, energetic Evil Dee and the bespectacled Mr. Walt.  In the mid 1990s they rose to prominence crafting some of the most gorgeous haunting basslines that have ever gurgled out of a speaker for Black Moon, Smif n' Wessun and others.  The Dewgarde brothers' beats have a knack for making murderous lyricism as cleverly entertaining as a Kubrick steadicam shot.
While George and I need to have an offline discussion on the Beatminerz' back catalog, I thought I would break out this dissection of Walt and Evil Dee's LP version of "I Gotcha Opin," one of the duo's most illmatic productions.  This post is bumped to you from The Audio Goldrush...
My good friend Fearless Jones and I have been clowning friends of ours who are intent on mastering video games such as Guitar Hero and Rock Band. Our feeling is if you spent that much time strumming a guitar as you did playing a video game you would be a regular Bobby Dylan by now. Or in these guys case, Eddie Van Halen:
This phenomenon reminded me that as a Hip Hop DJ/Producer I am in no means immune to this idolatry. I have always favored “covering” songs or making versions or remixes. In my early days at the school of Bard Knocks one mentor of mine (*cough*couch*CHASE*ahem) became exasperated that I was constantly looping beats that had already been broken. He threw up his hands as day after day I would tinker with King George's boxy Gemini samplers re-looping Diamond D bass lines or X Clan drums (no small irony that versions were X Clan's Paradise's production hallmark in the early 90s).
In my defense, finding the originals of a Hip Hop beat, picking it apart, cutting 'em up and mixing them back together gives me a greater knowledge of how exactly beats are made. In this instance, I chose to break up and piece together Black Moon's “I Gotcha Opin.” Attempting to push the same buttons as producer Mr. Walt revealed a couple of things to me:
I had considered playing this straight ahead like the original Black Moon version but I decided to actually be creative and re-imagine this beat with drops and variations. Don't front.
gOTCHA oPIN (A18 Mix):
A post by ARM 18 at 2/03/2011